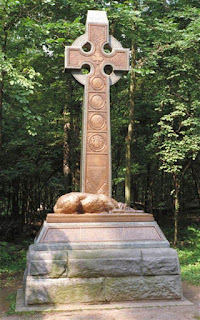 Mike Fitzpatrick will speak on the Irish Brigade at Gettysburg. The Irish Brigade was one of the legendary units of the Civil War. Three of its regiments were from New York. The other two were the 28th Massachusetts and the 116th Pennsylvania. With its numbers horribly thinned at Antietam and Fredericksburg, the three New York regiments could barely muster two weak companies each. But the Irish Brigade was still a force to be reckoned with when they were thrown in to support Sickles’ collapsing line on the afternoon of July 2.
One of the memorable moments of the battle came as the men of the Irish Brigade knelt while the Brigade Chaplain, Father William Corby, stood atop a boulder and pronounced general absolution to the men.

They attacked into the Wheatfield, charging across into the Rose Woods and the Stony Hill. The Confederate advance was temporarily halted just as it threatened to overwhelm the entire Union position, although the brigade was flanked by Confederate Reinforcements advancing from the Peach Orchard and forced to withdraw back across the bloody Wheat-field.

The fighting 69th traces its lineage to the Irish Brigade.