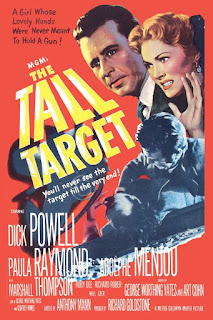 The Tall Target is a 1951 American historical thriller film directed by Anthony Mann. This historical thriller is set shortly after President Abraham Lincoln was elected and centers upon a bodyguard who learns of a plot to assassinate him. He tries to tell his superiors, but they scoff at the notion. This causes the bodyguard to quit and launch a personal investigation. He is on a Baltimore-bound train when he learns that one of the potential assassins is also a passenger. Now the bodyguard must somehow stop him and the other would-be killers.