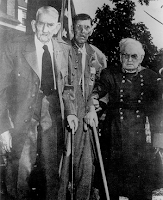 Pleasant Crump was a Confederate soldier, believed by some to be the last living American Civil War veteran who fought for the Confederacy. Although survived by several claimants of questionable status, only Crump’s status has been conclusively confirmed. Born in Alabama, Crump and a friend left home and traveled to Petersburg, Virginia, where Crump enlisted as a private in the 10th Alabama infantry in 1864. Crump saw action at the Battle of Hatchers’s run and the Battle of Petersburg before witnessing General Robert E. Lee’s surrender at Appomattox Court House. He returned to his home in rural Alabama following the Confederate surrender. Crump soon relocated to Lincoln in nearby Talladega County. There, at twenty-two, he married Mary Hall, a local. Five children resulted from this marriage, which lasted until she died on December 31, 1901. Crump took Ella Wallis of Childersburg as his wife in 1905. Following her death in July 1942, he shared a home with a grandson's family. The United Confederate Veterans awarded him the honorary title of colonel. In 1950, he met with 98-year-old Gen. James Moore, who was then recognized to be the only other remaining veteran of Alabama. Crump died having just turned 104 on December 31, 1951 and is buried in Hall Cemetery, Lincoln.
Posted by andrewathanas@hotmail.com at 8:53 PM
Newer Post Older Post Home